Video Game / Pirates of the Caribbean 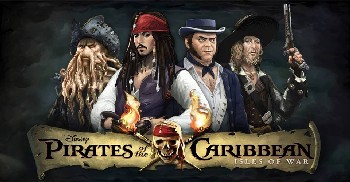 Rising the flag on the masthead, the sails and the ropes' holding tigh, the gunners are eager to fire, well prepared for the fight...

The Pirates of the Caribbean were adapted into a Facebook video game. The character helps Jack Sparrow against enemy pirates, settle in an island for repairs... and Jack Sparrow left, leaving the player stranded in an island, surrounded by pirate ships and pirate islands. The player must build a base and a navy, and get upgrading the ships, weapons and defenses. The game was shut down on 2 September 2014.
Advertisement:

Not to be confused with any of the various other platform PotC licensed games, including Bethesda's 2003 Action RPG that is actually a converted Sea Dogs sequel, and LEGO Pirates of the Caribbean.

Pirates Of The Caribbean contains examples of: