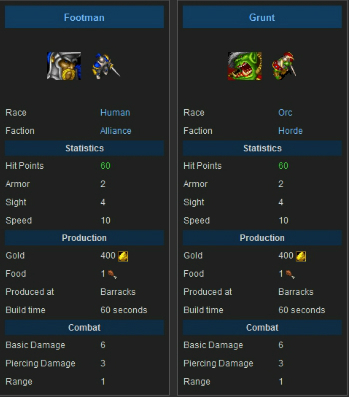 The universe is too small for the intergalactic powers of the day. Their armies, developed on different planets by several different cultures, eventually come to an epic clash.

You'd think this situation would present certain issues of ballistics and firepower. Weapons made on places millions of light-years apart must be very different from each other. At least they'll have a different caliber.

Instead, the enemy walkers take the same amount of damage as your tanks and dish out just as much hurt. Okay, so they're shooting laser zaps instead of artillery shells, have different names, and almost certainly will have different looks... But in the end side A's heavy tank has the exact same purpose and tactical function as side B's heavy hovertank and side C's heavy crawler. Ditto for A's scout vehicle, B's fast hovercraft and C's four-legged jumping crawler. There might be some minor race differences, and maybe one or two units that are genuinely different, but the end result is still a ridiculously improbable balance.

This trope is most often seen in Real-Time Strategy games whose designers are too lazy to think of alternate tactics for the various sides and/or ways to balance the differences; in fact, games such as StarCraft are praised for averting this trope. Having said that, the lengthy play-testing cycle of Warcraft III, and the card bannings in Magic: The Gathering, show you one benefit to having only cosmetic differences: it's way easier to create a working Competitive Balance, since no side will ever end up with uber-powerful superunits the other can't counter. The strain on Willing Suspension of Disbelief and impact on strategy is just something you have to live with.

This is a lot more common in games set in real or historical settings, as it's rare for any human military to have a technological advantage for long without someone on the other side trying to copy it, and possibly one-upping it. At least at the infantry end. Once you get into vehicles, things tend to shift: a Tiger is imbalanced vs. a Sherman (which itself outmatches say, a Renault Ft), but they're all tanks.

Where the two sides are identical besides their colour, it's a Palette Swap. If the differences aren't even cosmetic anymore, you're looking at either Civil Warcraft or an Enemy Exchange Program, depending on the context. The Trope Makers are the "Needle" and "Wedge" spaceships from Space War.

Films
This is a common issue in live-action adaptations of superhero films.