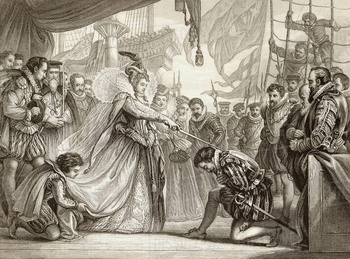 Queen Elizabeth I knighting privateer Sir Francis Drake.
[T]he Admiral - gods bless her soul - has outlawed piracy in Limsa Lominsa. So why do ye think there are still so many soddin' pirates in this town? I'll tell ye why: it's 'cause there's still one way for 'em to loot an' pillage without incurrin' the wrath of the law. All ye need to do is apply to serve the thalassocracy as a "certified privateer". A captain with a privateer's license is free to terrorize the seas till the aldgoats come home... so long as he only targets vessels what belong to the Garlean Empire.
Jacke of the Rogues' Guild aptly describes the concept, Final Fantasy XIV
Advertisement:

A privateer was a private person or private warship authorized by a nation's government by letters of marque to attack foreign shipping. Privateers were only entitled by their state to attack and rob enemy vessels during wartime and only ships of the country named in the letter of marque. Privateers were part of naval warfare of some nations from the 16th to the 19th centuries. The crew of a privateer, if captured, might be treated as legitimate prisoners of war by the enemy nation, but they also ran the risk of being treated as common pirates. The costs of commissioning privateers was borne by investors hoping to gain a significant return from prize money earned from enemy merchants.

Often used to allow the pirate atmosphere without some of the… less civilized parts. Turning into a real pirate was a recurring problem with privateers. Of course, one nation's "privateer" is often another nation's "pirate". Sometimes the same nation would even issue letters of marque when fighting a powerful navy they couldn't match in conventional warfare, then turn right around and denounce it as an illegitimate tactic when they were up against less powerful nations. Indeed, until the eighteenth century the distinction wasn't formalized in international law, and any ship with enough muscle could go a-rovin on a whim however respectable it was in port. It was also common for an Intrepid Merchant to moonlight as a privateer. After all, all that was needed was a paper, and one could have the object of profiting by Plunder as well as being the subject of it.

Compare and contrast with Private Military Contractors. Do not confuse with Wing Commander: Privateer, a Spin-Off of the Wing Commander games.