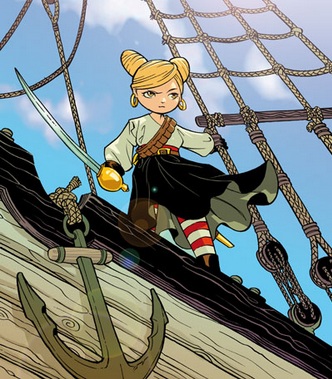 "Her white shirt and black leather, they complement her eyes,
A red sash brings it t'gether (and the boots half up her thighs)
Cap'n Hook's a fan and Jack Sparrow thinks it's great,
It's in the books, it's canon, so let's all celebrate!"
— "Hey, It's Can(n)on

Pirates! Villains of the seven seas! Strong or handsome men, with ladies hankering for 'em!

…and then there's the Pirate Girl, a young girl or woman who is part of a pirate crew. Except she is either accepted by the roguish male crew without any apparent problem or explanation, or is part of a ship with an all female crew. Depending on age, she may or may not be a Little Miss Badass; either way, usually an Action Girl. There are two types: one type would be either cute or an statuesque. The much, much more common type is the "bad girl".

Truth in Television—in rare instances. Pirates, going out of their way to scorn law and flout custom, were just as likely to ignore 'a woman's place' as any other rule. Historically, a number of female pirates did plough the seas along with the men, sometimes rising to positions of authority. Some did so by disguising themselves as men; others found themselves among pirate groups who didn't care about your gender, as long as you did your job in the crew. In the modern world, women might have a place on Ruthless Modern Pirate Ships (often referred to these days as maritime terrorists) depending on the local culture.

Not to be confused with Pirate Wench, a term that usually refers to a woman who sails with pirates, doing "women's work" for them, perhaps while providing eye candy. The Pirate Girl is a pirate in her own right.

Any "little boy" found on a pirate ship will half the time be this girl in disguise.

The Pirate Girl often has a Dark and Troubled Past detailing how she ended up in this position; abusive fathers whom they are in a "Well Done, Son!" Guy relationship with seems to be a common theme.

A Sub-Trope of Pirate.

Avast! Anyone caught making cheap jokes about "booty" or "treasure chests" will be made to Walk the Plank.