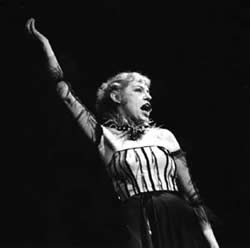 And this afternoon it will be quiet at the dock
When they're asking which ones have to die.
And there you'll hear me saying: ALL OF THEM.
And then, when the head falls, I'll say: HOPPLA.
And the ship with eight sails
And with fifty cannons
Disappears with me.
Advertisement:

Alternatively known as "The Black Freighter", and as "Seeräuber-Jenny" / "Träume eines Küchenmädchens" in the original German.

is a song by Bertolt Brecht and Kurt Weill, most famously performed by Lotte Lenya. Several years after writing it (originally with the title "Lied vom Brigantenschiff"), Brecht included the song in his 1928 play The Threepenny Opera (where it's told either by Polly Peachum or by Jenny the whore, depending on the production). Because of its intentionally high Applicability, activists and artists have used the story to convey a wide range of political ideas. The song has been constantly re-adapted since its first American performance in 1954, with its interpretation varying from anti-racism to symbolism for the atom bomb.

The story is about a young hotel maid named Jenny who dreams of, one day, being rescued by pirates from her demeaning job. When the pirates come (on "a ship with eight sails and fifty cannons" — or in the first American translation, "a black freighter with a skull on its masthead") they'll burn the town down, bringing everyone in the town to Jenny, who decides whether they live or die. Or, in the American version, when they die. She decides everyone should be killed, and with a final "HOPPLA!" (often translated into English as "Whoopsie!"), she'll board the ship and sail away.

Interpretations of the poem tend to fall into two categories: the Jenny character is either a total angel who brings a much-needed social revolution, or a morally ambiguous Villain Protagonist whose actions should be sharply criticized. Some adaptations additionally show Jenny as a whore or a sex slave — this is because the American version of The Threepenny Opera combined the characters of the Pirate Jenny and Jenny the whore, played by Lotte Lenya (pictured above).

It should be noted that Kurt Weill didn't write the music for this particular song: he only orchestrated Brecht's original melody.

The song or the poem have been used or referenced in the following works: