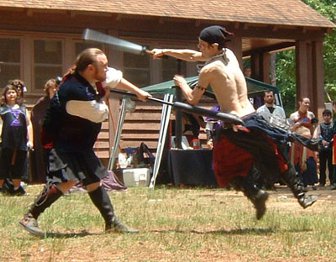 It's at least as cool as it looks.
"And so LARPing was born! Dignity died shortly thereafter."
— The Spoony One, reviewing Mazes and Monsters
Advertisement:

LARP stands for Live-Action Role-Play. It's like role playing, but instead of sitting around a table and describing what your character is doing, you generally actually get up and do it (or act it out). Think of it as cross country improv theatre.

LARPing has multiple sub-genres. In the US, these include Boffer (which generally includes actually swinging padded weapons at one another)note note that boffer weapons are also used in games with no role-playing, live-action or otherwise, ie. you just try to hit the other guy and Theater (which is generally based around pre-written characters accomplishing social and political goals, with combat frequently represented by abstract mechanics. Theater LARPing also goes by a variety of other names.) It should be noted that most boffer games also include a fair amount of roleplaying and that logic puzzles also play a large role in both types.

In Europe, LARP usually sits between these genres, mixing character development and role-playing with combat. Weapons are far more realistic than their American counterparts, manufactured using latex-covered foam, or harder, unpadded plastic in some systems; consequently, the style of combat includes taking care not to hit too hard; some variant on "Pull your blows" is a standard rule.

In Democratic Russia, LARP is often indistinguishable from historical reconstruction, not that anyone but hardass living-history types (and, more importantly, Jerk Jocks who are in historical reenactment for the fighting) tries to enforce the distinction much. There is a huge sliding scale, from theater RP, where the absolute worst thing that can IRL happen to you is a rubber knife somewhere uncomfortable, to buhurt

The main distinction of ex-USSR LARP scene lies in players' attitude. Around one third of the players treat it as combat sport with lots of DIY. Other two thirds are composed of teenage counterculture wannabees who are in it for the chicks, said chicks, escapists (mostly teenage, though there are quite a few more mature players) and plain old fantasy fans.

, reforged leaf springs, PVC piping and hardwood, with repurposed sports implements and furniture parts considered a thing of shameful past and frowned upon. Western-style padded weapons are slowly gaining ground in the ex-USSR, but many people still view them as "sissy" and "cowardly" and limit their use to players below the age of maturity (and thus unable to give consent to broken bones). The "pull your blows" rule either only applies to unarmored targets or is absent altogether, and wearing armor is considered the manly way to avoid injury. Likewise, armor has evolved from cardboard, wood and plastic to complex sets of canon-accurate gear tailored to a specific setting, historically-accurate getups brought over from living history and historical combat (which are either past or future hobbies of more than half of LARPers around this parts), sports\hidden armor kits, replicating the construction pinciples of ballistic armor with DIY-store materials, and wide use of fencing, motorcycling and other off-the-shelf protective gear.

Worthwhile games are either multi-day (up to a week) forays into the wild, far from any civilisation, with a large part of baggage being vodka (no, really — and this applies to LARP worldwide, not just Russia!), or sizeable social events with elaborate costumes and convoluted plotlines held in university ballrooms.

Settings are often some variant of the standard fantasy setting (of varying levels of "yeah, we nicked this straight out of The Silmarillion"), possibly with a dash of Alternate History, or taken directly from a popular RPG.

LARPs have their own set of common tropes, including some form of Closed Circle or Enclosed Space (which give players an excuse to stay in game even if their character's smartest option would be to leave) and Time Travel (regardless of genre.) However, the largest LARP events (sometimes called "fests", for festivals), who host thousands of players, occur on large swaths of land, which gives players space to flee while remaining in the game.

LARP, especially boffer LARP, is considered one of the easy targets of nerddom. This is mainly due to the widespread popularity of the "Lightning bolt" video on YouTube, which features boffer combat in all its anarchic "foam weapons and spell packets" glory. Strangely, LARP makes an easier target among nerds than outside of geekdom. The occasional small-press article on LARPing is usually sympathetic, and Role Models, while pointing out the inherent goofiness of LARP, still treats it as a great way for people to socialize and build confidence. On the other hand, the "Lightning bolt" video is usually circulated around message boards and geek-oriented blogs, often as a way of saying, "I may be a nerd, but..."

In several European countries, LARP is viewed in a different light. Especially in the Nordic countries, LARP is increasingly considered Serious Business, to the point where it is no longer considered an acronym, but represents an entirely independent concept, "larp" (similar to how "laser", "radar", and "modem" went from acronyms to proper nouns). This is not so much "nerds acting out D&D in a forest somewhere" anymore, but more serious historical/mythological reenactment (in the same way that 18th-19th century reenactment groups like Napoleonic Era, Wild West, Colonial America etc. tend to be taken more seriously). While your mileage may always vary, LARP is creeping into the realm of the mainstream. For example, there are more Danish kids participating in LARPs (often school or daycare related) than there are kids in football clubs and a popular LARP-show

is aired on Danish national television (and exported to Sweden) . (Denmark also has a LARP boarding school - see 'Examples' below.) The inter-nordic "Meating Point" or "Node"

convention in particular strive to advance LARP as a medium in many ways, and serious academical papers on LARP is becoming an increasingly common phenomenon. In The New '10s, LARP is even becoming a subject of academic studies at the Nordic universities, with a large chunk of the contemporary role-playing theory penned there.

A LARP session in New York

Clint Barton discovers the wonders of being in a LARPing session. And he finds the person he's looking for . However, said person insist he's a viking while wearing his Ronin suit.

A LARP session in New York

Clint Barton discovers the wonders of being in a LARPing session. And he finds the person he's looking for . However, said person insist he's a viking while wearing his Ronin suit.