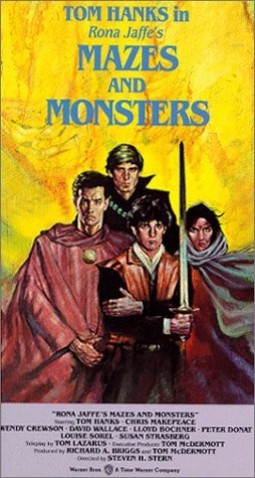 A Made-for-TV Movie from 1982, Mazes and Monsters is the story of four college students who are heavily involved in the titular fantasy role playing game. All four students play the game as an escape from their own various personal problems. Jay Jay's mother redecorates his room at the drop of a hat and tends to ignore him. Kate is still reeling from her father walking out on the family and her struggles as a woman and a writer. Daniel's parents repeatedly pressure him to switch schools to MIT and become a programmer despite his yearnings to be a game designer. Finally, Robbie flunked out of his last college and still can't cope with his feuding, alcoholic parents nor the disappearance of his older brother Hall. At first the four bond over their shared experiences within Mazes and Monsters, and Robbie and Kate begin to go out. However, when Jay Jay manipulates the group into a LARP in a local cavern, Robbie's mental state shatters and he believes himself to actually be his priest, Pardieu. Eventually, he runs off to New York seeking The Great Hall, forcing his friends to try and track him down when the police prove useless. While they get him home safely and the three other students abandon Mazes and Monsters in favor of true adulthood, they learn that Robbie's delusions have yet to vanish and they end up indulging him in one last game of Mazes and Monsters.

If the above description doesn't make it clear, the film was an attempt to play up to the anti-Dungeons & Dragons moral panic still gripping the nation at the time of the film's release. It was adapted from a novel by the same name written by Rona Jaffe, who very loosely based it on the story of James Dallas Egbert III, a college student who disappeared in 1979 amidst media rumors of a Dungeons & Dragons role-playing game driving him into insanity. The truth of the incident

had nothing to do with the game, but both the book and film were rushed out to capitalize on the media frenzy from the news reports. The film tries to portray the game as negatively as possible, suggesting that people that played had severe psychological problems. That three of the characters stop playing the game as a symbol of maturity says much about the film's pejorative view. On the other hand, the movie oddly dodges the Satanism conspiracies that were also popular at the time, instead focusing on the psychological effects the game supposedly has.

The other notable element to the film, besides its place in gaming history, is that Robbie was played by a 26-year-old Tom Hanks, still in his early television days before he'd truly broken out as a major star.

Mazes and Monsters provides examples of the following tropes: