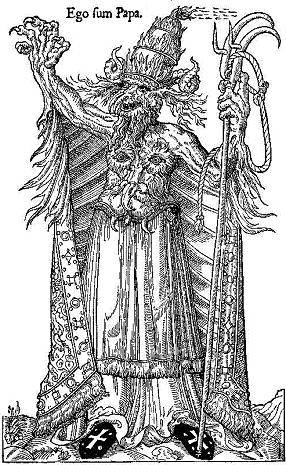 "I am the Pope."
"That's the problem with being the devil, everybody demonizes you."
— Satan, Old Harry's Game
Advertisement:

TV Tropes is the devil. It teaches our children it's okay to be aroused by filth. It wants to make everyone in the world fat and lazy, pollutes the English language even more than Internet speak and unlike those evil drug dealers, they will actually admit they want to ruin your life!note No wait, they already did! Self-identity is discouraged among the members of this cult, to the point where personal pronouns and references to oneself are actively discouraged. It's anti-American.

Of course none of that is true, or completely true, but that's how Demonization works. It's about twisting facts, or making them up, to make something look worse. Sometimes it can actually go as far as claiming something is satanic, but usually it's more down to earth. Either way, these claims are made either without proof, or counter to actual evidence.

After all, why let facts get in the way of complaining about things you don't like?

No, you want people to hate this thing. So you will do whatever you can to make this thing seem truly evil. It kills people (based on one or two deaths, that were quickly proven unrelated)! It ruined a nation (was coincidentally a fad in a country just before a coup d'etat)! God told you it's the sign of the devil (but somehow didn't tell anyone else, if it was that important)! Someone (whose name escapes me) even told me that it Eats Babies and puppies, someone Think of The Children!!! If it is a race, a nation, or another group of people, they are Always Chaotic Evil!

Strawman arguments can be a form of demonization at times (and vice-versa), but the two terms differ; strawman arguments involve making a weaker (or absurdly stronger) statement of the opponent's views in order to demolish them, while demonization usually ignores those positions outright in favor of a totally invented narrative.

A Super-Trope to Attack of the Political Ad, Nicknaming the Enemy, Ron the Death Eater, Everybody Hates Hades, Historical Villain Upgrade, and Adaptational Villainy.

Compare with Accentuate the Negative (amplifying negatives instead of just pulling them from nowhere), Everyone Is Satan in Hell (when the symbolism of a work is interpreted to be demonic), Character Derailment (a writer suddenly has a character act demonic for no good reason), Godwin's Law (comparing persons or ideas you don't like to Hitler and/or Nazism, which carry the same connotation of absolute evil), Ron the Death Eater (demonizing a character in fan fiction), Digital Piracy Is Evil, Abomination Accusation Attack, Dehumanization.

Since one person's Demonization may seem like another person's "fair and frank criticism," we should probably just say: "No Real Life Examples, Please!"