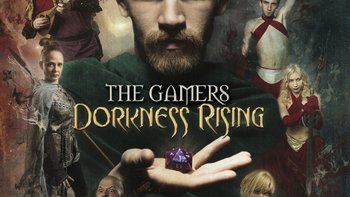 "How am I supposed to write a module based on an adventure, if we never finish the adventure?"
— Kevin Lodge
Advertisement:

The Gamers: Dorkness Rising is a feature-length sequel to The Gamers, featuring a new group of role-players trying to make their way through a campaign—and dying repeatedly. They decide to run it over again and add some new blood, but the only person they can get to join is one player's ex-girlfriend. The campaign deals with a necromancer who is taking over the world...or so it seems at first. Unlike the first film, all of the players' names are revealed, as well as the fact that the game they are playing is explicitly Dungeons & Dragons, since they had the consent of Wizards of the Coast to use their game.