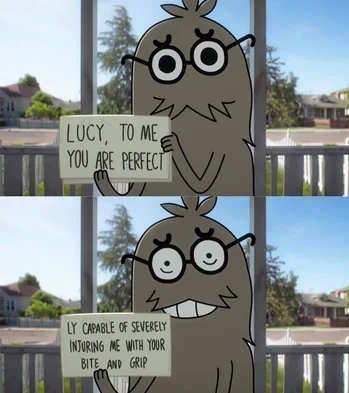 "But Jack was too clever. He led the sea king inland, stretching out the waves, which sucked! [turns over page] ...OUT the sea king's power as there was not enough water to drown Jack."
— Flynn, The Gamers: Dorkness Rising
Advertisement:

A gag in which a character is reading something aloud, and accidentally cuts himself.

Off in the middle of a sentence by stopping too early. The truncated sentence is still grammatical, so it sounds like he's saying something complete.

...ly different from what he meant, and it takes a moment for the audience and the other characters to catch up with the new information and parse the sentence correctly. This usually results from trying to read from cue cards, note cards or a screen that doesn't scroll quickly enough. A similar catch-up effect can occur if an unprepared character encounters a garden path sentence

or a crash blossom

which gets Zadig into deep trouble until the other half is found.
Tyrants are prone to flagrant Crimes;
To Clemency his Crown he owes;
To Concord and to peaceful Times,
Love only is the worst of Foes.

And then, Adam flips to the next card, and his speech turns into one about the timeline of WWII.

"When fighting a Gremloblin use water..." [turns page] "...only as a last resort, as water will make him much much scarier."

"When fighting a Gremloblin use water..." [turns page] "...only as a last resort, as water will make him much much scarier."