You Wanna Get Sued? 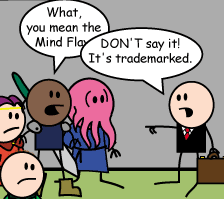 When Dungeons & Dragons rules became free for other publishers to use,

some monsters remained trademarked, like the mind flayer.
Groundskeeper Willie: Boy, you read my thoughts! You've got "the shinning"!
Bart: You mean "shining."
Willie: Shh... You wanna get sued?!
— The Simpsons, "Treehouse of Horror V," "The Shinning"
Advertisement:

Sometimes, a rather more direct Shout-Out or name dropping is attempted, but to do so would skirt dangerously close to trademark law. While there are plenty of ways to use substitutes or write around the trademarks, another way is to go ahead with the reference, but deliberately not go through with it, just far enough for the audience to know exactly who or what you're talking about.

There are many ways to get around this visually: Censor mosaic, a black bar over the eyes, or pull back and only make a strong resemblance. But with dialogue, a common way is to have a character obliquely reference the Fourth Wall by stopping the mention before it finishes, directly warning the speaker about getting their makers in trouble. In writing, especially for comics and manga, whatever word they want to say will be said by the character, but the text of the name itself will be partially blanked out or substituted with wingdings.

The Stinger has been removed due to a copyright claim by Nontendo.