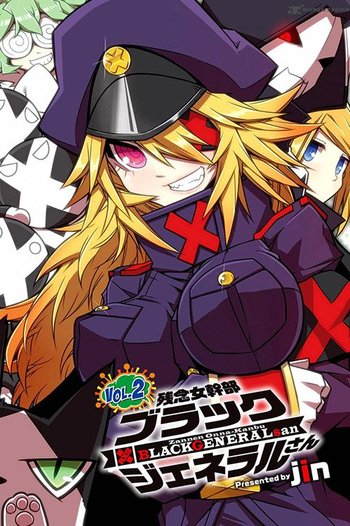 Today, we shall conquer the world... And stalk my favorite hero of all time!

The story follows the misadventures of Miss Black General, who is one of the executives of a rising new villainous organization called RX that aims for world domination. However, there's a bit of a snag with that: the local superhero Braveman. No, not that he's a powerful adversary, though he's certainly that. The issue is that Black General is his number one fan and mainly became a villain so she'd have a good excuse to stalk him. Any time Braveman commits a heroic act and tries to prevent Black General's schemes, the latter mistakes his actions as a form of flirtation, much to Braveman's frustration.

How will Black General and her organization conquer the world if she can't conquer her true feelings towards her number one hero?

The manga is written by Jin (Mugenjin) and published and serialized by Dragon Age. It is licensed for release in English by Seven Seas Entertainment.