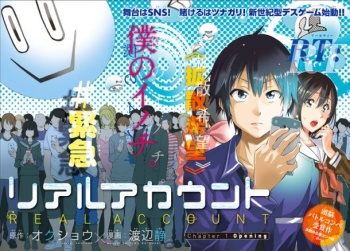 20 Minutes into the Future, Japan has been taken by storm by the social network Real Account, commonly called "ReaAcc" by the populace. ReaAcc has become an ubiquitous part of the nation's culture, having combined all functions of other social networking services into one platform and received support from the government, businesses, and the public. The service has become an essential part of everyone's life, and naturally a big concern of many, if not all of its users, is the followers they accrue. The number of followers one possesses is critical to establishing an online standing.

Kashiwagi Ataru may be an Ordinary High-School Student in real life, but on Real Account, he has over 1500 followers...that he gained by falsifying information on his public profile. But hey, at least he's #4 in nationwide score rankings for "No Answer"!

For the most part, Ataru has no social life outside of Real Account. But his online presence garners him enough attention by the social network's creators for him to be whisked away with the ten thousand most popular users into cyberspace. There, he will have to compete in a ReaAcc-hosted death game televised across the country. The key to staying alive? Followers willing to put their lives on the line for the participants...and how many care enough to make the commitment?

Written by Okushou and illustrated by Watanabe Shizumu, Real Account started off in Kodansha's Bessatsu Shonen Magazine in 2014 before moving to Weekly Shonen Magazine (and changing the main cast) in 2015. In 2018 the series moved back to Bessatsu, where it concluded in 2019 at 24 volumes. A movie was announced to be in the works in the same year but it is currently in development hell or shelved. It's licensed in English by Kodansha USA, but is victim to very sporadic releases.