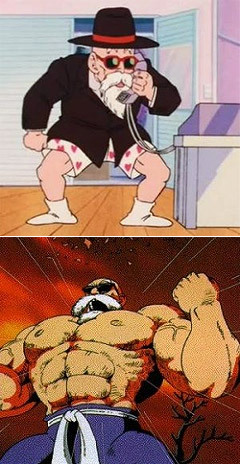 "As soon as I find my pants, I'm going to kick your ass!"
Vlad Plasmius: This can't be happening! You're an idiot! An idiot!
Jack Fenton: That may be, but I'm the idiot who beat you.
— Danny Phantom, "The Million Dollar Ghost"
Advertisement:

At first glance, they're The Fool. The Ditz. The sort of person you wouldn't trust to screw in a lightbulb without hurting themselves or someone who continually makes a fool of themselves around others who find them a total embarrassment. And no, it's not the act of just Obfuscating Stupidity — they're really like that.

Then someone pushes the right button at the right time translation:  the wrong button at any time at all and things suddenly change. The goofy smile disappears. Their eyes start glowing. An aura of energy surrounds them. Little pieces of rock start floating up from the ground. They begin to speak with the Voice of the Legion. And they proceed to demonstrate the fine art of the Curb-Stomp Battle on everyone involved.

It doesn't really matter what makes the character badass when they switch gears. They may display enhanced speed, strength, and martial skills. They might demonstrate latent competence, leadership skills, and courage completely inconsistent with their normal personality. They may Hulk Out, manifest Psychic Powers, MacGyver together a plasma rifle out of a toaster and a tv remote, unleash an Angst Nuke, or even become an One-Winged Angel.

Similarly, the reasons for this deceptive outward appearance vary. They may be a genuinely good-natured moron or a kind-hearted idiot who only fights when they have no other choice. They might be a Retired Badass who's gone a bit senile. They may be handicapping themselves in some way that reduces their overall abilities — for instance, the Inept Mage may fumble with Functional Magic because their true strength and skill lies in dangerously uncontrollable Wild Magic. Occasionally the character even has a Power Limiter that seals away from their full strength until needed — they might not know they have the power, let alone how to control it.

The main point is not the powers, but the personality shift that comes with them. No matter what their exact situation is when these characters find themselves in a situation where a badass is needed and they are the only ones available, the guy who's been written off as harmlessly incompetent grits their teeth and becomes a One-Man Army.

Common triggers include a friend or loved one in danger (see Mama Bear and Papa Wolf), a Million-to-One Chance scenario, or just a "worthy cause". Sometimes, just getting 'em really, really pissed off will do the trick — although their easy-going personalities make that a rare occurrence.

Inevitably, after the dust settles they're right back to smile goofily, tripping over their own feet, and just generally acting like the Plucky Comic Relief once again — while their teammates are rubbing their eyes, and trying to figure out what just happened. Often, the character doesn't actually know himself.

In some cases, the character will gradually learn to control his power — although he'll usually still need to Freak Out a bit to use his full power — and may evolve into an Idiot Hero, or more rarely, a straight-up Messiah.

In other cases, things will go bad. The badass powers are required too often, and they gradually take their toll on a previously cheerful individual. It might even turn out that the individual was once like their badass side all the time, but somehow 'sealed' that part of themselves away — or it was sealed away by someone else — to keep them under control. Usually results in a Knight in Sour Armor or, in the case of females, an Emotionless Girl or Broken Bird, and their friends wondering if Saving the World was really worth the price. In the worst cases, this can end up as a full-blown Superpowered Evil Side or Jekyll & Hyde scenario. The Japanese term for this is "dame elite" ("dame" meaning no good).

Contrast Obfuscating Stupidity, where the incompetence is just an act; and Minored in Ass-Kicking, where the character acts like The Smart Guy instead of The Fool; and Mistaken for Badass and Leeroy Jenkins, which are essentially two forms of Crouching Badass Hidden Moron. Compare/contrast Weak, but Skilled, The So-Called Coward, Beware the Silly Ones, Genius Ditz, Heroic Resolve and Eccentric Mentor, which can overlap. If the body count they rack up is unintentional, then we're dealing with Mike Nelson, Destroyer of Worlds or Non-Malicious Monster. See also This Looks Like a Job for Aquaman, where their badassdom occurs because they're in an environment where their abilities stand out relative to everyone else's. Crouching Moron Hidden Badass will sometimes occur as a result of Giving the Sword to a Noob or putting The Load in the right situation. The Rich Idiot With No Day Job counts on people not thinking of this trope.

Please do not confuse this with Let's Get Dangerous!, which is when a seemingly ditzy or harmless character also demonstrates fighting skill, but without the change in personality and may not involve powers.

Check out the index for sub-types of this trope.