Film / Juan of the Dead 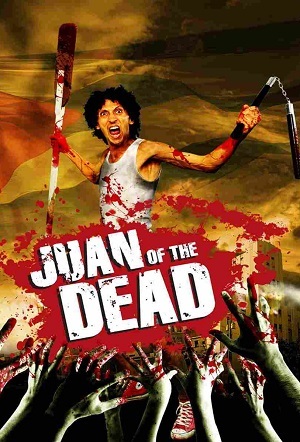 AKA Juan de los Muertos, 2011 horror/comedy film about a Zombie Apocalypse, filmed in, of all places, Cuba. The eponymous protagonist is a fortyish slacker who lives in Havana, eking out a living with occasional low-rent fishing expeditions with his friend Lazaro, and attempting to reconnect with his estranged daughter. When a zombie contagion starts spreading among the city's populous, he first ignores the problem, then rounds a few of his cohorts and establishes a for-profit zombie-killing service. Until, inevitably, events spiral further out of control, and the gang are forced to find a way to survive or flee the island...

Probably no real surprises plotwise, but the film displays a wacky sense of humor, and offers American viewers a rare look at life in modern Havana.