Film / Without a Clue 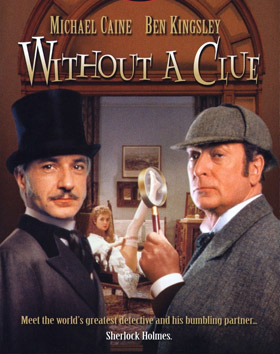 Without a Clue is a 1988 comedy film, the premise of which is that Dr. Watson (Ben Kingsley) created the fictional character Sherlock Holmes so that he could solve crimes incognito. His published case journals were so popular that he was obliged to hire an out-of-work actor, Reginald Kincaid (Michael Caine), to play Holmes. However, Kincaid turned out to be a bumbling, gambling, womanizing drunkard who gladly took all the undeserved credit for solving crimes, and now their relationship is a very rocky one. Watson is just about ready to ditch Kincaid and strike it out on his own, but no-one will believe that Dr. Watson, the archetypical sidekick, is really a Great Detective, so the two have to get along for long enough to solve one last big case.