Film / The Good, the Bad, the Weird 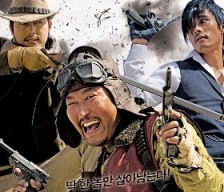 The Good, the Bad, the Weird is a colorful Korean film that plays homage to The Good, the Bad and the Ugly, and a self described "Kimchi Western" by Word of God. While the original is an epic Spaghetti Western, the remake is a more fast-paced and less serious action film.

Three Koreans in exile cross paths in 1941 Manchuria during the Japanese occupation. Park Chang-yi (Lee Byung-hun), the hitman/bandit leader, is hired to steal a treasure map from a Japanese official, but a train robber, Yoon Tae-goo (Song Kang-ho), beats him to the punch — only to be captured by a Bounty Hunter, Park Do-won (Jung Woo-sung). Tae-goo talks Do-won into helping him search for the treasure instead, and they set off through the desert together, with Chang-yi's gang and the Japanese army in pursuit. During the action-filled chase that follows, each of the three turns out to have some hidden motives.

Compare and contrast with Sukiyaki Western Django, another East Asian film that is a unique take on the Western.

The Good, the Bad, the Weird provides examples of the following tropes: