Theatre / The Time of Your Life 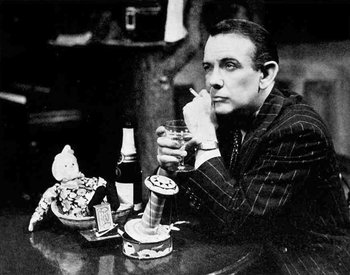 The Time of Your Life is a 1939 play by William Saroyan.

The action is centered in a dive bar, "Nick's Pacific Street Saloon, Restaurant and Entertainment Palace", in San Francisco. The action centers around Joe, an affable man who has enough money to spend his days lounging around in a bar. Joe encourages Harry, a young man with dreams of being a dancer. He matches up his buddy/flunky Tom with Kitty, a hooker who dreams of a way out of the life.

Other characters include McCarthy, a philosophizing longshoreman, "Kit Carson", an old man who tells fanciful stories; Blick, a meanspirited vice cop; and Nick, the owner and bartender of Nick's. Gene Kelly played Harry in the original Broadway production.

Made into a film in 1948 which starred James Cagney as Joe, directed by H.C. Potter.

Alternative Title(s): The Time Of Your Life