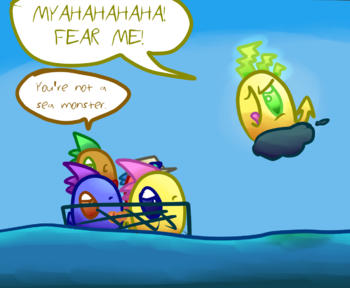 Who's this weirdo?
Stomp! is a story based fantasy adventure webcomic created by Brodnork that began late 2016.

The comic centers around the antics and adventures of four friends named Stomp and Chomp Silverfeather, Clomp Firestone, and Comp Wintershell. The characters are creatures called nobwogs, who live on a fantasy world called Traagler. The friends go on seemingly harmless adventures, but something mysterious is going on behind the scenes.