Film / To the Limit 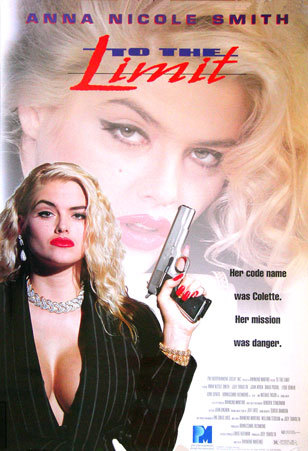 "Her code name was Colette. Her mission was danger."
Advertisement:

Before Raymond Martino was a low-budget film director, he was an actor (and a student of the Method, too, believe it or not). His first appearance in a major Hollywood film was as one of a gang of bikers who threaten Pee-wee Herman in Pee-wee's Big Adventure. Later in the Pee-wee movie (bear with us, this is going somewhere), the fictional events of the story get adapted into an equally fictional movie in which Pee-wee is reimagined as a suave spy character (played by James Brolin) who fights ninjas and romances Morgan Fairchild. Now, imagine if someone made a movie just like that fictional one, but did it dead seriously, and loaded it with plenty of nudity and gore (though, thankfully, not at the same time), and filled it with lots of Bad "Bad Acting" and shoddy editing...But It Really Happened!

Martino's To the Limit (1995) can best be described as the kind of film that Ed Wood might have made if he'd lived in our own era, and also if he'd have been less interested in wearing women's clothes than he was in removing women's clothes. It's actually a sequel to the earlier Da Vinci's War, which featured much of the same cast...but since Da Vinci's War did not feature a very famous supporting player who (for reasons that will become obvious momentarily) was probably the sole reason for many men and boys wanting to see To the Limit, there was inevitably a great deal of Continuity Lock-Out for most of the latter film's original audience (and, to be fair, that fact alone might go a long way toward explaining why To the Limit came off as such a mess).

The Designated Hero of this movie is Frank Da Vinci (Joey Travolta) note  and yes, that would be the big brother of that other famous Travolta , a Vietnam vet and vigilante who is continuing his private crusade of vengeance from Da Vinci's War. The man he's tracking happens to also be responsible for the murder of the spouse of a rogue CIA agent. Da Vinci eventually discovers that this agent is a woman - and a blonde and very beautiful one - named Colette Dubois.

Plot specifics aside, this movie is best remembered nowadays for its depressing - arguably even tragic - subtext of being the first film in which the late model/actress Anna Nicole Smith attempted a "serious" role (she had previously had a large role in the third Naked Gun film, which was pure comedy, and then a very small role in The Hudsucker Proxy, a romantic comedy with serious overtones). Very much in keeping with her famous obsession with Marilyn Monroe (of whom most people generally consider Anna Nicole the late-twentieth-century equivalent), Smith apparently wished to show moviegoers around the world a completely unexpected side of herself. Needless to say, the results were far from satisfactory.

As stated before, To the Limit is pretty much incomprehensible if you haven't seen the earlier Martino film, but notwithstanding even that it is, by any objective measure, a lousy film. There's the plot that just kind of jumps from place to place with little explanation for the shifts, a musical score that sounds like it was composed by a robot, and a huge cast, quite a few of whom are female and are obviously there only as Fanservice Extras. Travolta generally bumbles through his role, and most of the rest of the performances are either clichéd or unmemorable. In retrospect, it's clear that this was crafted for the sole purpose of having a (hopefully) lucrative star vehicle for the 1993 Playboy Playmate of the Year.

Nevertheless, To the Limit is not without potential for enjoyment. It's got a generous helping of action, plenty of sex appeal, and lots and lots of juicy B-movie tropes (which alone makes it more than worthy of witty analysis on this wiki).