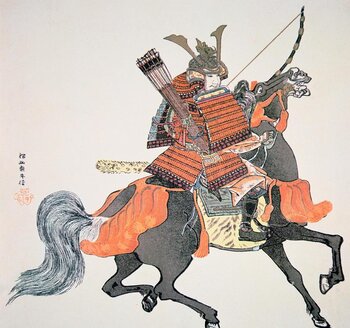 "Bushido is realized in the presence of death. This means choosing death whenever there is a choice between life and death. There is no other reasoning." - Yamamoto Tsunetomo, paraphrased
so if you live outside the palace, how are you supposed to protect your shit from criminals?
♪ hire a samurai. ♪
everyone started hiring samurai. Correction rich important people hired samurai. poor people who could not afford to hire samurai did not hire samurai.
— bill wurtz, history of japan
Advertisement:

Members of the military class in feudal Japan, they had considerable social status, and after the end of the 16th century until the mid-19th century, they were the only Japanese citizens legally allowed to own swords (with the exception of swords having blades less than 24 inches, which were legally considered wakizashi and legal for non-samurai to own), causing wearing both a long and short sword (called the daishō, literally "big-little") to become a symbol of the samurai.

Theoretically, samurai were supposed to follow the bushido code of honor, which stressed loyalty to one's master, self discipline and respectful, ethical behavior. However, the degree to which individual samurai actually adhered to bushido (which as a formal concept may be Newer Than They Think, according to historians, though patterns and traditions in common with the concept certainly existed throughout the centuries) varied about as much as the degree to which individual knights in Europe adhered to the code of chivalry — which is to say, you could find everything from bandits in armor to saints of the battlefield. Although women could be and frequently were warriors, the social and military rules for them were somewhat different than for men.

A popular misconception holds that the samurai were the counter-culture to the Ninja; that is, whereas samurai tend to came from the upper classes and were honorable warriors who fight face to face and use no "dirty" tricks, ninjas tend to be from the lower classes, were skilled at unorthodox warfare and would not hesitate to use backstabbing, poison, or spying to gain the upper hand. This is commonly seen in works featuring ninjas, in which samurai and ninja were either depicted as mortal enemies, or ninjas being mercenaries hired by the samurai to do the unsavory wetwork honorable samurai would not do. However, the aforementioned depiction is not historically accurate. In Real Life, while some ninjas were mercenaries, most ninjas were actually samurai themselves. The idea that the ninja were something separate from the rest of Japanese society came about during the Edo period (a 250 year long period of peace), after Tokugawa Ieyasu became shogun and unified the country. Edo-period samurai started assuming the values of the court-aristocracy, while simultaneously resurrecting centuries-disused aspects of the samurai honor code from before the Mongol invasion, and didn't like to talk about actual warfare—they also pretended they were primarily swordsmen, while the main roles of the samurai in war were actually Horse Archers, archers and spearmen. Furthermore, warfare in the Sengoku Period involved extensive use of gunpowder weapons, another useful implement of war the samurai distanced themselves from during the Edo Period—albeit the infantrymen who used them, who carried the technical label ashigaru, were nevertheless recognized as the lowest rung of the samurai hierarchy. Many modern historians believe the entire concept of ninjas being the counter-culture to the samurai was invented by Edo-period novelists to avoid showing recently gentrified samurai involved in anything remotely dishonorable.

Subtypes of the samurai commonly seen in anime include the Kid Samurai and the Rōnin, a samurai without a master to serve whose 'low class' status is sometimes designed to be more identifiable.

Samurai are popular heroes in period stories, and no few anime feature them. Such heroes, naturally enough, tend to be paragons. Outright subversions tend to be for specific characters and even then usually criticizing the upper class as a whole. Samurai and their code of ethics were featured heavily in Japanese military propaganda during the early twentieth century. For obvious reasons, they are much less popular in certain Asian countries.

When samurai are presented negatively, expect them to be wearing their full armor, including an elaborately designed and intimidating helmet. When they are presented as higher-ranking officials, Beleaguered Bureaucrats or Upper Class Twits (particularly those working for the shogunate/military government of their period), they are usually presented wearing simple-yet-clearly refined kimono (either the hitatare

from the Kamakura Period

◊ or the kamishimo

from the Edo Period

◊). When they're being presented as paragons, expect them to at least be helmet-less, or sometimes wearing nothing but a Hakama

. Rōnin in particular probably aren't going to be armored and maybe be visually contrasted to armored samurai - though what with Rōnin tending to be Walking the Earth, it's pretty logical they aren't going to be able to haul full armor around. Speaking of samurai armor, it was usually made of leather-backed iron scales laced with silk, or later on, iron or steel lames riveted together. While it was often coated with lacquer to prevent moisture from rusting the metal, it was never made of wood like some sources claim.

Most fictional depictions of samurai tend to be Always Male, though female examples aren't entirely unheard of. In fact, there was a specific type of samurai known as onna-musha or onna-bugeisha (meaning "women warrior" in Japanese). They were noblewomen trained in the art of bushido and were expected to protect their household, family, and especially their honor in times of war much like their male counterparts. The armor worn by an onna-musha was not too dissimilar to most standard samurai armor worn by men. The naginata was the weapon of choice for many female samurai which has even spawned its own trope. On the rare occasion when female samurai do appear in works set in the feudal period of Japanese history, expect them to be Yamato Nadeshiko ladies of war who are culturally refined, elegant, and capable of fighting.

Not to be confused with the Cyberpunk "Street Samurai" character type. A more modern take is the Corporate Samurai, who takes the general ethos of the samurai and applies it to a modern setting. Samurai Shinobi is when you mix Samurai with Ninja (which is Truth in Television if you look closely enough). Samurai Cowboy is when you mix the classic samurai with the Western cowboy. Speaking of which, those three character types definitely got made because Everything's Better with Samurai. Western Samurai is when you have a samurai warrior of non-Japanese descent (usually European or East Asian).

See also Jidaigeki. You were probably expecting their iconic katana swords to get a mention around here, so for that, see the page Katanas Are Just Better (and don't forget not Every Japanese Sword Is a Katana). Japanese Spirit also incorporates a lot of old samurai tropes and virtues into modern manga. Knight in Shining Armor and its subtrope Knight Errant are the Western equivalents of the samurai and the ronin respectively.

In the Ghost of Tsushima review, Angry Joe plays the role of a samurai, reflecting his preferred playing-style.

In the Ghost of Tsushima review, Angry Joe plays the role of a samurai, reflecting his preferred playing-style.