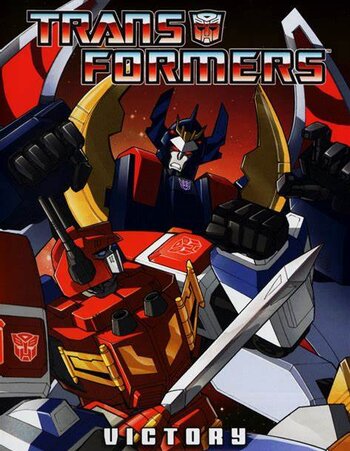 Transformers Victory is the Japanese-produced sequel series to Transformers Super-God Masterforce, taking the focus back to good old fashioned Autobots vs Decepticons. Star Saber, the new leader of the Autobots, is heading the charge against a new Decepticon warlord named Deathsaurus, who began stealing energy from the Earth to fuel and reactivate an old Decepticon space-fortress. This new Autobot commander is also the foster father of a human boy named Jan, who lost his parents to a Decepticon attack.

The series lasted for 44 episodes, though several of them were mere clip shows. All were released in 1989. A manga with a markedly more bizarre storyline exists.

Alongside Transformers: ★Headmasters and Transformers: Super-God Masterforce, the entire series is released on DVD for the first time in North America by Shout! Factory.

As with both of its predecessors, Victory also received a hilariously bad english dub from Omni Productions. What's interesting to note is that the english dub takes Victory's opening

and, with some small editing of the title, uses it for the other two shows

The series main character, Star Saber and Victory Leo are getting the Haslab treatment

Followed by Transformers Zone with one episode OVA, but with a series of story pages.