Anime / Twilight of the Cockroaches 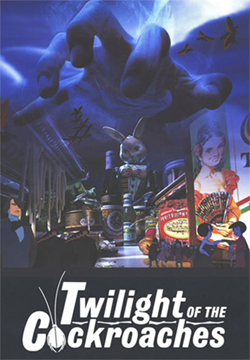 Twilight of the Cockroaches is a 1987 Hiroaki Yoshida directed film once licensed by Streamline Pictures.

A colony of cockroaches lives peacefully in lonely bachelor Seito's apartment, as he suffers depression and lets his apartment become a mess. The cockroaches worship Seito as a god, and the crumbs he leaves out are like manna from heaven for them. Naomi, a sweet 19 year old cockroach, is engaged to the nice but boring Ichiro. She'd rather have the exotic warrior hunter from another tribe, Hans. Naomi and the other cockroaches live affluently and like humans, eating crumbs out in the open in the lap of luxury while Seito sleeps and wastes away. The real threat comes when Seito brings home a girlfriend, who is disgusted by his messy apartment. She brings in pesticides and other poisons. Mass genocide of cockroaches is brought on by Seito's girlfriend's cleanliness. Crushings, charrings, and mutilations of the cockroaches occur. Death by spray can, rolled newspaper, vacuum cleaners, and a stomping boot are witnessed from the terrifying point of view of a cockroach. What the humans see as basic hygiene is a holocaust to the cockroaches, a point driven home by visual references to Hiroshima and Auschwitz. Naomi and the other cockroaches can't figure out why their god Seito has turned on them.

Not to be confused with Grave of the Fireflies.

Inspiration to the plot of the 1996 movie Joe's Apartment.