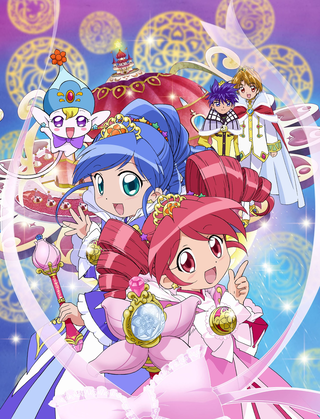 Twin Princess of Wonder Planet (Fushigiboshi no☆Futagohime) is a Shoujo Magical Girl series from the director of Sailor Moon, Junichi Sato. Initially a concept with its own interactive webpage

by BIRTHDAY (also known for their Daikaijuu Monogatari games), Hal Film Maker took the idea and adapted it into an anime, which began in April of 2005.
Advertisement:

Fine and Rein are fraternal twins who are also princesses of the Sunny Kingdom, one of the seven kingdoms of the Wonder Planet, a hollow planet with a floating sun in the middle. They also happen to be "the most un-Princesslike Princesses ever". Fine (the red-haired one) is a Tomboy Princess with a love of sweet things while Rein (the blue-haired one) is a Genki Girl who loves cute things but gets a little insane when it comes to romance.

Unfortunately, the floating sun is starting to lose its power. As the Princesses of the kingdom that looks after the sun, Fine and Rein are secretly tasked by Princess Grace — the legendary hero of the Sunny Kingdom — to investigate the source of the sun's troubles. And to do so, they get the power to change into super poofy dresses. Don't question it, just run with it. Later takes a decidedly dark turn.

It later got a second series, Twin Princess of Wonder Planet Gyu!, in which Fine and Rein get sent to Princess School in order to receive a certification that will allow them to become Queens. During the orientation of new students, they are presented with a legendary bell that will only ring when a certain person, destined to become the "Universal Princess" touches it. Until this time, the bell has never rung until Fine and Rein touch it, transforming them into newer, frillier, poofier dresses. Meanwhile, a strange dark entity has begun to possess people all over campus, causing them to descend into irreversible depression. Unlike the previous series, it follows a standard Monster of the Week format and delves into Magical Girl Warrior themes instead of the Cute Witch style it originally had (presumably due to the success of a similar format in the second half of the original series). Part of the reason of why it was different was because Junichi Sato left in the beginning of its run, most likely due to Creative Differences. Some cite the sequel as something that should have never existed.

This series is notable for its extremely high level of sugary sweetness and for the most impractically poofy princess dresses ever, where the amount of frills is directly proportional to magical power.

When Fine and Rein lose their hearts permanently after defeating the Black Crystal Planet, it takes Bright and Shade's Manly Tears to revive them.

When Fine and Rein lose their hearts permanently after defeating the Black Crystal Planet, it takes Bright and Shade's Manly Tears to revive them.