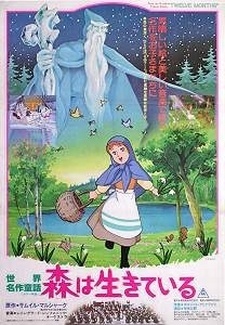 Twelve Months is the story of an orphaned girl named Anya. When a spoiled Queen, who is also orphaned, sees a picture of a galanthus flower (snowdrop), she immediately wants one. However, the galanthus only blooms in spring, in the month of April. It is New Year's Eve and there was no way that such a flower can be found in the middle of the winter. The Queen offers a basket of gold to anyone who can bring her a bag of galanthus and Anya's cruel guardian sends her out in a blizzard to find some. There she is saved from freezing to death by twelve spirits, each representing one month of the year, who entrust her with a precious secret.

The film was based on a children's book which was itself based on an old European fairytale.