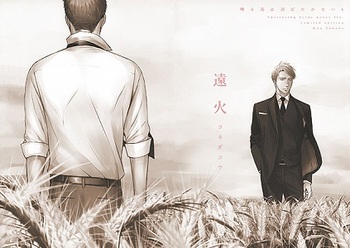 Twittering Birds Never Fly (Saezuru Tori wa Habatakanai / 囀る鳥は羽ばたかない) is a Yaoi Genre manga created by Yoneda Kou. It is a sequel to both Don't Stay Gold and Tadayoedo Shizumazu, Saredo Naki mo Sezu * English: "Not sinking, not crying but floating", two one-shots that focus on what brought about the Yakuza setting of the story.

The story follows the developing relationship between Yashiro, an infamous yakuza known for his extreme levels of promiscuity and masochism, and Doumeki, his impotent and stoic bodyguard.

Yashiro is a former street rat that climbed up the ladder of the organization, embroiled in the usual power struggles of the ruthless Yakuza society, while Doumeki, a former cop, is trying to fit in and to come to terms with what he feels for his boss.

The manga began serialization in the Josei magazine ihr HertZ in 2011, and is still ongoing. An anime film adaptation