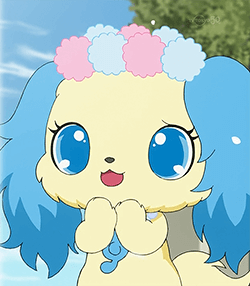 How could you say no to eyes like these?
"Love me with thine azure eyes,
Made for earnest grantings;
Taking colour from the skies,
Can Heaven's truth be wanting?"
— Elizabeth Barrett Browning, "A Man's Requirements"
Advertisement:

Innocent "baby blues" or clear, pure and shining, these eyes are blue to symbolize youth, naïveté, inexperience, and purity of soul. In extreme cases, may indicate Blue Is Calm and Heavenly Blue. This may derive from the fact that many babies (and not just human babies; non-human examples include cats, dogs, horses and crows) are born with blue eyes, due to them having no melanin in them, and later develop color from exposure to sunlight, symbolically "losing their innocence". Either way, a popular choice for heroes, heroines and younger characters. In older works, gray eyes were used for this instead. Common with Hair of Gold, Heart of Gold (or with Rose-Haired Sweetie, if the cast tends towards technicolor hair).