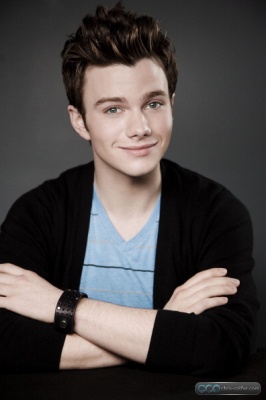 "...most importantly, to all the kids who watch our show and the kids who our show celebrates who are constantly told 'no' by the people in the environment or bullies at school that they can't be who they are, or have what they want because of who they are—well, screw that, kids!"
—Chris Colfer, 2011 Golden Globe Awards

Christopher Paul Colfer (born May 27, 1990 in Clovis, California) grew up outside of Fresno, CA, doing oral interpretation for the speech team in high school as well as participating in the drama club and doing community theatre, including the role of Kurt von Trapp in The Sound of Music.

Then, one day, he auditioned for a little show called Glee.

Colfer actually auditioned for the role of wheelchair-bound nerd Artie, but show creator Ryan Murphy was impressed by Colfer's talent and charm. He scrapped a preplanned character and replaced him with the character of Kurt Hummel (named after Colfer's prior role as Kurt from Sound of Music, and the cherubic Hummel figurines), a Camp Gay countertenor. Much of Kurt's character is inspired by Colfer and Murphy's own struggles growing up gay. Since the show's premiere, Kurt has become one of Glee's most beloved characters due to Colfer's heartfelt portrayal. Even Television Without Pity adores him. He won a Golden Globe Award for his work on the series in 2011, and scored Emmy nominations in both 2010 and 2011. He made the Time 100 in 2011, with the piece by Dianna Agron.

Colfer is currently in the process of expanding his work beyond Glee (of the original cast, he and Amber Riley had the least professional experience going in), writing, executive producing and starring in the coming-of-age comedy Struck By Lightning (which had its world premiere at the 2012 Tribeca Film Festival), writing the pilot script for a potential television series based on the book The Little Lost Witch and penning a series children's novels, the first of which (The Land of Stories: The Wishing Spell) made the New York Times Children's Literature best-seller list in its first week of publication. By 2017 he'd published five more books in the series, along with a few related collections of short stories — all of which were equally well received.

He has a thing for Alpacas.