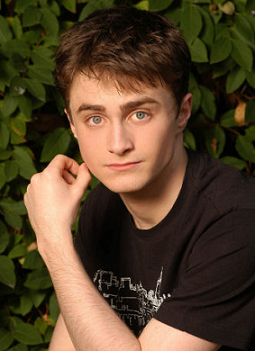 “I used to be self-conscious about my height, but then I thought, fuck that, I'm Harry Potter.”
Advertisement:

Daniel Jacob Radcliffe (born July 23, 1989) is a British actor, most famous for playing the lead role of the young wizard Harry James Potter in the Harry Potter film series.

The son of a literary agent and a casting agent, Radcliffe began acting in small roles before Harry Potter. In the year 2000, the hunt for the right child actor to play Harry was starting to resemble the search for Scarlett O'Hara. After seeing Radcliffe in a BBC version of David Copperfield, Chris Columbus asked Radcliffe's parents to allow him to audition, but they declined. Sometime later, David Heyman and Steve Kloves attended a production of the play Stones in His Pockets and encountered Radcliffe in the audience. The next day, Heyman called Radcliffe's parents and this time they agreed to let him audition. Radcliffe happened to be taking a bath at the time his parents got the call that he had gotten the part and he admits to being so happy that he cried. Radcliffe woke up in the middle of the following night, causing him to wake up his parents to ask them if he'd really gotten the part or if it was All Just a Dream.

It wasn't, of course, and Radcliffe played Harry Potter over the course of eight films, from 2001 to 2011. In 2007, Radcliffe starred as Alan Strang in Equus on the West End, reprising the role on Broadway in 2008. While the Moral Guardians were up in arms about Harry Potter appearing naked on stage, the critics had a He Really Can Act reaction. In 2011, he returned to Broadway to star in a revival of How to Succeed in Business Without Really Trying.

In 2012, he starred as Arthur Kipps in a Hammer feature film version of The Woman in Black. In an odd way, he is following in the footsteps of his onscreen father, Adrian Rawlins, who played the same role on television in 1989. Radcliffe also acted alongside Jon Hamm as the titular young doctor in British drama A Young Doctor's Notebook. More recently, he played a young Allen Ginsberg in the 2013 movie Kill Your Darlings and starred in the 2014 Rom Com The F Word (retitled What If in some countries) and the black comedy horror Horns. He had lead roles in the 2016 film Swiss Army Man and Imperium. Has been known to do the occasional side project like doing dramatic readings

Myrtle drops in on Harry while he is in the bath.

Myrtle drops in on Harry while he is in the bath.