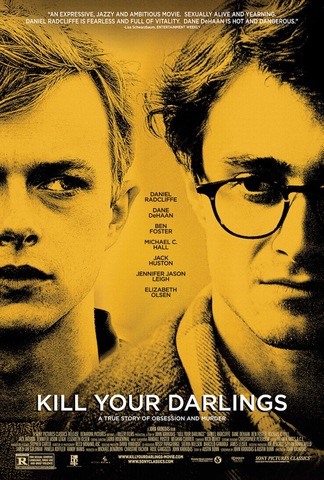 The guy on the right looks familiar...
"In writing, you must kill all your darlings."
— William Faulkner
Advertisement:

Kill Your Darlings, a 2013 biographical Drama directed, co-written, and co-produced by John Krokidas in his feature-length film debut. The story revolves around a specific event involving the pioneers and leaders of The Beat Generation, Allen Ginsberg (Daniel Radcliffe), Jack Kerouac (Jack Huston), and William S. Burroughs (Ben Foster) before they were famous. The movie is Based on a True Story, although how much of the film is dramatic license and how much is actual history isn't apparent.

The movie opens with an underwater shot accompanied by Allen Ginsberg's voiceover, "some things, once you’ve loved them, become yours forever." As the camera pans up and out of the water, we see Lucien Carr (Dane DeHaan), shirtless and bloody, holding a body that he just murdered. Both the visuals and voiceover set the tone and theme for the rest of the film.