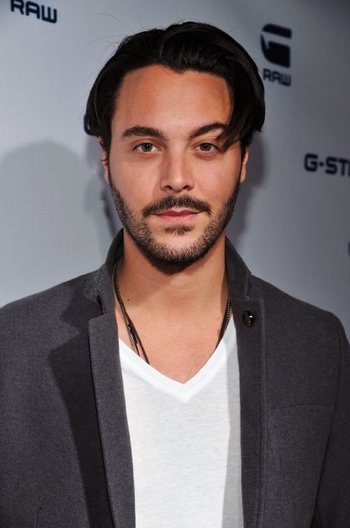 "You can almost read any emotion through someone's eyes."
Advertisement:

Jack Alexander Huston (born 7 December 1982 in King's Lynn, England) is an English actor (though he was born into an American family on his father's side and holds dual US/UK Citizenship). He is best known for playing Richard Harrow in Boardwalk Empire, Pete Musane in American Hustle, the titular character in 2016's Ben-Hur, and Odis Weff in Fargo Season Four.

He is partners with model Shannan Click and they have two children.

Jack Huston comes from one of Hollywood's oldest famous families. His parents are actor Tony Huston and Lady Margot Cholmondeley. He is the great-grandson of Walter Huston (Oscar-winning actor of the 1930s and 1940s), grandson of John Huston (one of the most famous directors to ever live, go watch The Maltese Falcon), maternal grandson of Hugh Cholmondeley, 6th Marquess of Cholmondeley, aunt Anjelica Huston, uncle Danny Huston, aunt Allegra Huston, among others.