Western Animation / Justin and the Knights of Valour 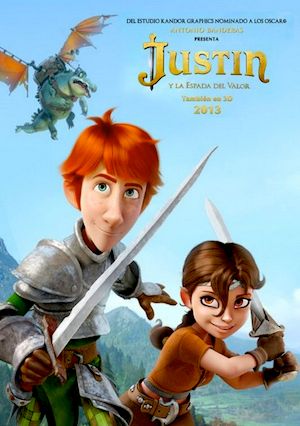 Justin lives in the Kingdom of Gabylonia, where bureaucrats rule and knights have been ousted. His dream is to become one of the Knights of Valour, like his grandfather, Sir Roland. But his father Reginald, a widower and the chief counsel to the Queen, wants his son to follow in his footsteps and become a lawyer. After an argument with his father, Justin seeks comfort from his grandmother who encourages him to follow his dreams. Justin notices that his grandfather's sword is missing, so he decides to go and find his grandfather's sword as his quest. His grandmother gives him a key which originally belonged to his grandfather and tells him to go to an abbey where three wise monks would train him. Before Justin leaves on his quest, he visits his crush, Lara, who is a spoiled brat. He went to say farewell to her, though she wasn't really listening. Justin then slips out of home and embarks on a quest to become a knight.

Along the way, he meets a beautiful, feisty girl named Talia, a barmaid who works at the Broken Eagle Inn, a job which she doesn't enjoy, and a quirky wizard called Melquiades. Meanwhile, the Queen is seen to have some deep regrets regarding her decision of ousting the knights, of which an egocentric armour polisher overhears before deciding to turn himself into a "knight", naming himself Sir Clorex. He instantly becomes popular with the townsfolk, and is used to attract customers at the Broken Eagle Inn.

Not long after, Justin arrives at the abbey and receives training from the monks: Braulio, an inventor who receives nervous attacks when something goes wrong with his machinery and inventions, Legantir, the head monk of the abbey. and Blucher, a knight and an old friend of Sir Roland. They train him using the ways of the Knights of Valour so that he may defeat the traitorous and resentful Sir Heraclio, who even now plots his revenge on the Kingdom he feels had spurned him.

Justin and the Knights of Valour provides examples of: