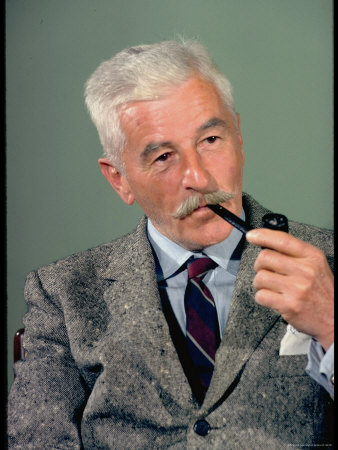 "In writing, you must kill all your darlings."
Advertisement:

William Cuthbert Faulkner (September 25, 1897 – July 6, 1962) was a writer from Mississippi. Faulkner won the Nobel Prize in Literature and is generally considered one of the greatest American authors. Most of his stories are set in his mythical Yoknapatawphna County, based on the real Lafayette County, where Faulkner was born. Faulkner overdose remains the number one cause of death in the Grammar Nazi community.

He was one of the pioneers of stream-of-consciousness writing, where the thoughts of a character are given completely unfiltered. Unlike some writers, he didn't tend to write an entire novel in stream-of-consciousness, but he didn't shy away from depicting the thoughts of mentally handicapped or mentally ill people, one of the many things that give him a reputation for being extremely difficult to read.

His battles with editors resulted in some of his novels being published with changes from his intended text. The most glaring example is Flags in the Dust, which the publisher edited with his permission, but without his supervision, leading to a heavily abridged and altered text, re-titled Sartoris, being published. The original version was not published for some time. He also wanted to have The Sound and the Fury printed with color-coded ink to indicate flashbacks and changes of view-point, an idea which was shot down. Other novels were so difficult to edit that they went out full of typos. However, in recent years, many (even most) of his novels have been reprinted with corrections based on his drafts and various early proof versions, meaning that recent copies of his novels will generally be of higher quality than early editionsnote and colored-ink editions of The Sound and the Fury now exist, though they are hard to find.