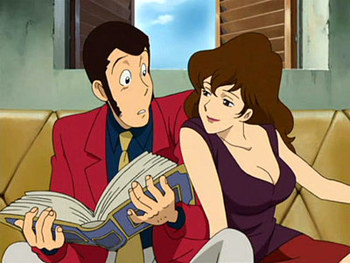 Sexy and she knows it.
"Favours to none, to all she smiles extends."
— Alexander Pope, "The Rape of the Lock"
Advertisement:

Certain characters only tease their Love Interest: in those cases the teasing is romantic, with the In-Universe expectation that they will eventually hook up. This trope can very easily overlap with Ready for Lovemaking if a character in an Official Couple teases their lover. Other characters tease people just for the hell of it. If the target is Not Distracted by the Sexy, expect The Tease to become frustrated and either give up or up the teasing to dangerous levels. (Possibly mixed with a morality plot if the target suddenly decides to accept an "offer" that The Tease never expected to be taken up on.)

Occasionally, this behavior is given a dramatic justification: it's revealed that this insincere sexual aggression is really a way of feeling powerful and in control, covering up deep-seated emotional insecurities, thus explaining why they can never act on them. See Tsundere and Yandere for other common ways fictional character cover their emotional insecurities.

This trope is often associated with the Hard-Drinking Party Girl and is a standard tactic of The Vamp and the Femme Fatale. Male examples often overlap with The Casanova if they'll flirt with literally anyone. It is not to be confused with either the Innocent Fanservice Girl, or a character who usually doesn't tease people, but ends up in a certain situation requiring them to Show Some Leg.

Compare with The Gadfly, a nonsexual version of this trope to provoke a reaction for amusement. Also compare with Shameless Fanservice Girl. Not to be confused with The Teaser.