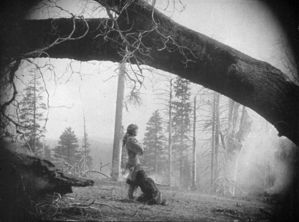 The Half-Breed is a 1916 feature film directed by Allan Dwan, written by and starring Douglas Fairbanks.

Fairbanks is Lo Dorman, illegitimate child of a Native American mother and a white father that abandoned her. Lo is raised to adulthood in the Sierra Nevada mountains by an old mountain man. Eventually the mountain man passes away, leaving Lo alone, belonging to neither the white nor the Native American world. Lo wanders into the town of Excelsior and attends a church meeting, where Nellie Wynn, the preacher's daughter, takes a fancy to him. Sheriff Dunn of Excelsior is also attracted to Nellie—and he turns out to be Lo's long-lost father. Further complications ensue with the arrival of Dick Curson, the sleay Snake Oil Salesman, and his attractive assistant Teresa.

A pretty remarkable example of Fair for Its Day filmmaking in 1916. The film presents a startlingly enlightened view of racism and white supremacy, such as when a title card lampoons the "Superior" white man and then cuts to a shot of dirty old drunken hobo, or when Lo is forced off his deceased adoptive father's land at gunpoint because he's a half-breed. But the hero is still being played by a white actor in Brownface, and the local tribe is still portrayed as a bunch of drunks who set fire to the forest for no apparent reason.