Film / The Curse of Quon Gwon 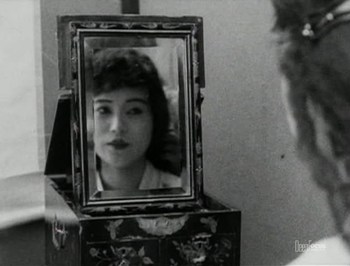 The Curse of Quon Gwon: When the Far East Mingles with the West is a 1916 film directed by Marion E. Wong.

A Chinese-American woman (Marion Wong's sister-in-law Violet Wong) marries a Chinese-American man. They are joined together in a traditional Chinese wedding ceremony with various family members, including an older woman who appears to be the man's mother, and a younger woman, played by Marion Wong, who may be the man's sister. The marriage appears to work out well enough, but for some reason the man has to leave for somewhere else, much to the woman's displeasure. Left alone in the household, the woman has a confrontation with her in-laws.

The Curse of Quon Gwon was created by Marion Wong when she was 21 years old in an effort to represent Chinese-American culture. It failed, not securing distribution, receiving only two local screenings. Marion Wong abandoned filmmaking and went into the restaurant business. The film was long thought to be completely lost but two reels and part of another reel were eventually discovered, totaling some 36 minutes of footage from a film that was originally over twice that long. All title cards for the surviving footage were lost. The result is an incomplete film with no dialogue, although the narrative is still semi-coherent.