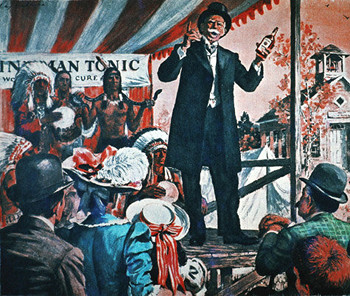 Just one drop of my medicine will cure all the side effects of my medicine!
"Do you suffer from rheumatism? Lumbago? Acute, chronic, sciatic, uh, neurologic, or inflammatory pain? Well, I represent the only company that makes the genuine article that cures, headaches, neuralgia, uh, earache, toothaches, backaches, swellings, sprains, sore chest, swelling of the throats, contracted chords and muscles, anxieties, and ravaged nerves, stiff joints, wrenches, dislocations, cuts and bruises! And, it adds vitality and vigor to the healthy man."
— Dr. Nigel West Dickens, Red Dead Redemption, to a group of gullible country folk
Advertisement:

A specific type of itinerant Con Man who makes his living by selling products which could not possibly work as advertised. The classic version sells literal snake oil (i.e. a product with 'medicinal' properties and exotic, unknown ingredients). A minor variation on this character is the Rainmaker, who takes people's money under the pretense that they will do something that they have no ability to do, such as making it rain.

This shady dealer is somewhat similar to the Hustler in being both less financially stable and having a poorer group of victims as well, and also has some overlap with the Honest John as being a purveyor of shoddy goods, not always phony medicine.

The character is often played as a Loveable Rogue, frequently being extremely attractive to local women because he's "seen the world" (or at least can convincingly pretend that he has). He's often inexplicably sympathetic, given that he makes his money by selling fake medicine to the genuinely ill. In general, the bigger his operation, the less likely he is to be sympathetic.

Definitely Truth in Television, hearkening back to the late-19th/early-20th century, when there were no standards for practicing medicine or selling goods and "caveat emptor"note Latin for "Let the buyer beware", an expression citing that the buyer must be careful about the quality or effectiveness of the goods (s)he buys was the rule. The rise of "alternative medicine" and other forms of All-Natural Snake Oil provides lots of modern examples as well, as do online scams (think of ads along the lines of "doctors hate this man who cured X with one weird trick!"). A Snake Oil Salesman is also known as a "quack", short for "quacksalver", though the term "quack" also covers fraudulent doctors who are nowhere near as skilled as they claim to be, such as the worst Back Alley Doctors. Any beneficial results given by the "medicine" are almost certainly down to the Placebo Effect.

In an interesting subversion, actual snake oil contains plenty of Omega-3, which has known therapeutic effects. However, in a Double Subversion, the actual benefits are so vague to laymen that the modern version of this could be "Fish Oil" or "Omega-3 Salesman". Also, oil from the Chinese Water Snake

has been used for a very long time in Chinese medicine, though not as the extreme panacea advertised by this sort of character (indeed, this connotation is largely unknown in Chinanote the closest analogy in Chinese, at least in some regions, would be "dog-skin poultice"). Rather, it's merely used as an ordinary anti-inflammatory agent, originally introduced into the United States by Chinese railroad workers. The modern definition originated with Clark Stanley, a Texas businessman who claimed to have received Hopi knowledge about the medicinal properties of rattlesnake oil — as it turns out, his medicine contained virtually no such oil, and in 1989 it was established that real rattlesnake oil contained only one-third of the Omega-3 content of their Chinese counterparts.

Similar to the Fake Faith Healer, but without the religious overtones.

NB: To count as an example, the Snake Oil Salesman has to be knowingly hawking fake medicine. Well-intentioned ignorance fits better under Worst Aid.

"Wartlop the Great", a supposedly phenomenal healer, is actually several gremlins in a costume, selling fake cures so they can con money out of desperate people like Gwendolyn.

"Wartlop the Great", a supposedly phenomenal healer, is actually several gremlins in a costume, selling fake cures so they can con money out of desperate people like Gwendolyn.