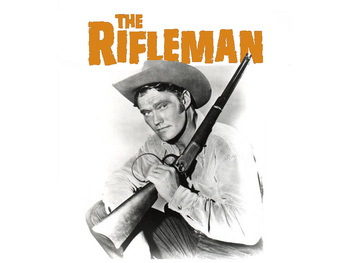 The Rifleman is an American live-action western that ran from 1958 to 1963.

The story is about Lucas McCain (Chuck Connors) and his son, Mark McCain (Johnny Crawford). Mark's mother and Lucas' wife died of an illness when the medicine failed to reach her in time. Lucas enters a turkey shooting contest to buy a plot in North Fork, New Mexico, but throws the contest to a younger gunman (Dennis Hopper) when the man who runs the town threatens Mark's life. Lucas confronts the man who runs/owns most of the town, who killed the younger gunman's relative/guardian. In the saloon Lucas, with a bit of help from Hopper, kills the man and his henchmen. The judge in the town invites Lucas to stay, which he does and buys the ranch.

The Rifleman is notable for being the first primetime television series about a single parent. It also is distinguished among Westerns by the fact that the main character almost never carried a pistol. True to the show's name, McCain's rifle is prominent in the series, appearing in virtually every episode. While not all episodes were resolved with violence, McCain did rack up a substantial body count, killing 120 villains in the show's 5-year run, a pretty staggering amount for a protagonist who was not in the military, law enforcement, or security services.

The show was created by Arnold Laven and ran on ABC. Among the show's more notable crew members was Sam Peckinpah, who wrote the Pilot and wrote and directed several other episodes.

The Rifleman is available completely and legally on Hulu.

Tropes related to The Rifleman: