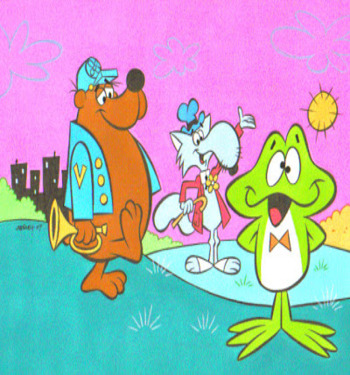 Hoppity Hooper is an American animated television series produced by Jay Ward, and sponsored by General Mills, originally broadcast on ABC on September 26, 1964.

The three main characters were Hoppity Hooper, a plucky frog, voiced by Chris Allen; Waldo P. Wigglesworth, a fox who hawked patent medicine, voiced by Hans Conried, who posed as Hoppity's long-lost uncle in the pilot episode; and Fillmore, a bear wearing Civil War clothes and (poorly) playing his bugle, voiced by William Scott (with Alan Reed portraying the character in the pilot). The stories revolved around the three main characters, who lived in Foggy Bog, Wisconsin, seeking their fortune together through different jobs or schemes, usually ending in misadventure.

In 1966, repeats aired concurrently in syndication as Uncle Waldo's Cartoon Show. A number of folks online confuse Uncle Waldo to be the original Series as it was never seen as Hoppity Hooper (apart from the episode title card) since its run on ABC.