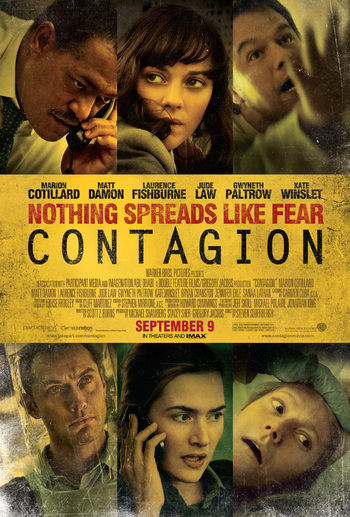 "Someone doesn't have to weaponize the bird flu. The birds are doing that."
Advertisement:

While heading back to Minneapolis after stopping at Chicago for a layover following a business trip to Hong Kong, Beth Emhoff (Paltrow) begins to exhibit symptoms of a highly contagious disease. Shortly afterwards, several other individuals in Hong Kong begin to exhibit the same symptoms. Upon returning home to her husband Mitch (Damon) and their two children, she collapses and is rushed to the hospital, while across the world, thousands of people begin to die from the same symptoms.

Mitch soon discovers that he's genetically immune to the disease, and desperately tries to protect his daughter Jordan from it, not knowing if she has inherited his immunity. This troubles Jordan because she can't risk infection to be with her boyfriend.

The film was critically praised for its realistic depiction of a contagious disease and grossed $75 million dollars at the U.S. box office.