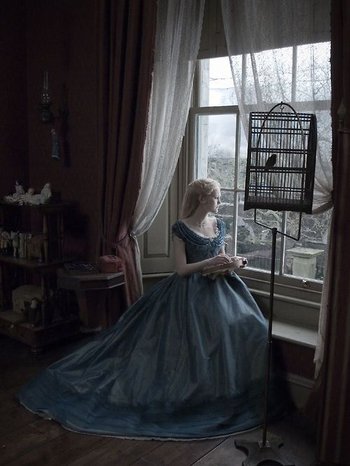 If I cannot fly, let me sing …
The bird, even a caged bird, remains a symbol of freedom and a stimulus for thinking about the relationship between freedom and human society.
— Frederick Jones, The Boundaries of Art and Social Space in Rome
Advertisement:

Many, many years ago, some artistic young woman destined for marriage looked at a pet bird in a cage and thought, "Look at this beautiful creature of the sky, confined to a cell that we may be entertained by its song... I know how that feels!" And thus this trope was born.

The Caged Bird Metaphor is a common Animal Metaphor whereby a character—often a woman or girl in an oppressive environment—is associated with a caged bird, symbolizing their sense of confinement and longing for freedom.

This trope is effective because birds in the wild tend to represent freedom due to their enviable aviary capabilities, making it all the more tragic when one is deprived of that birthright. (Note the term "jailbird" for "prisoner", and that "flying", "flying away", and "flying the coop" are all synonyms for escape.) The trade-off, of course, is that many metaphorical cages also offer protection and some degree of luxury; examples will often explore this choice between freedom and safety.

Most of the cages you will see used for this trope are tiny, old-timey birdcages with only one or two bare perches. The metaphor is less applicable in a modern context, as most bird keepers know to house their pets in larger, more interactive cages and not keep them confined all the time.

Often a Stock Visual Metaphor. Subtrope of Animal Metaphor and close sister-trope to Call of the Wild Blue Yonder. The character is not quite Always Female, though there is a long-standing literary tradition of applying this to The Ingenue, Damsel in Distress, or Rebellious Princess, where it often overlaps with Rich Boredom. Sister-trope to Girl in a Box. Will often be a Wide-Eyed Idealist or Stepford Smiler. Contrast Bluebird of Happiness. May overlap with Birdcaged, where it's no longer a metaphor. Compare Canary in a Coal Mine.

Note that a character just being compared to a bird or just being implied to be in a cage is not this trope.