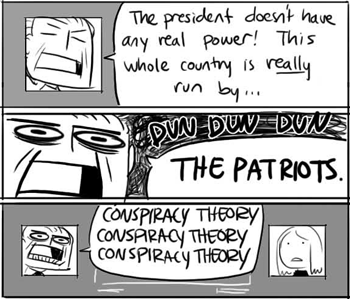 Coast to Coast AM: THE GAME
"This meeting is not taking place."
— Adolf Eichmann, Conspiracy
Advertisement:

Drama genre or plot in which the Powers That Be and/or The Government is evil and hiding something/trying to assassinate someone/establishing a puppet foreign government. Considering how incompetent the government are considered to be in just about every other area, it's remarkable how good they are at covering stuff up. A subtrope of The Conspiracy.

In fantasy examples, they might be the ones perpetuating the Masquerade, while the heroes want to reveal it.

Sometimes, though, the heroes are part of it, and have good reasons for upholding the Masquerade. Or maybe there's a good reason for all the hush-hush, and the two groups just didn't know better.

Compare No Such Agency. Likely to reside in a Black Site.