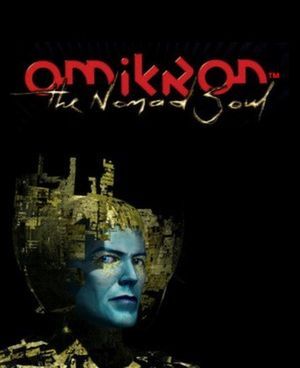 An Adventure Video Game created by French studio Quantic Dream, released for Microsoft Windows in 1999, and a Sega Dreamcast port the year following. In case you're wondering, yes, that is the very same Quantic Dream that'd later go on to release Fahrenheit and Heavy Rain, and, owing to it being their debut release, is a game often forgotten when mentioned in previews, reviews and discussions concerning the studio's greater catalogue.
Advertisement:

The plot concerns you, or more specifically, your soul. You buy a video game that allows your soul to enter another world; the eponymous city of Omikron.

Said city is a terrifying Dystopia where all human activity is planned by a monolithic super computer named Ix. Ultimately, the player finds out that the reason they are in the city is... well... not what they initially expected. The plot has players go from working for the government to working with a terrorist group to ultimately working their way though a Government Conspiracy that shows The Man Behind the Man is quite horrifying.

A Genre-Busting game that incorporates fighting, FPS and RPG elements alongside its adventure, Quantic Dream calls the game a "Soul Playing Game."

Is now available DRM-free on GOG.com

Also notable for featuring a soundtrack by David Bowie and regular Bowie collaborator and former Tin Machine guitarist Reeves Gabrels. Bowie's contribution to the soundtrack would eventually be included in his 22nd studio album, 'hours...'. Bowie also voices two characters in the game: the revolutionary philosopher Boz, and the lead singer for the subversive rock band, the Dreamers. As a result, following David Bowie's death, Square-Enix made the game available for free for a week in tribute. Details available here.

Not to be confused with Soul Nomad.

This Game Contains Examples Of...