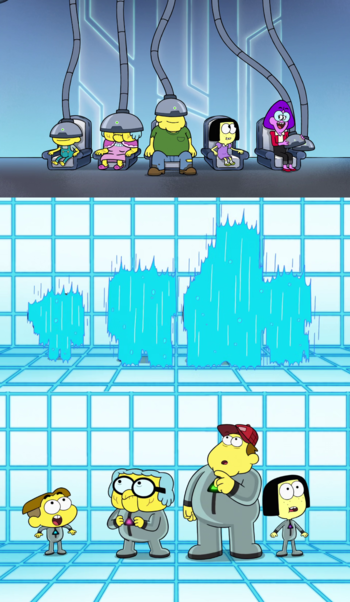 "If you feel a little tingle, that's just your consciousness being sucked right out of your body!"
"Your ECHO device will digistruct you right into the VR construct.
I'd go in there myself, but, uh... VR stuff totally squicks me out. No one's gonna take my body apart molecule by molecule without a fight! I'm an analog man!"
— Vaughn, Borderlands 3
Advertisement:

If you have a Cyberspace or Inside a Computer System setting and you want to involve humans, how do you get them there?

Brain Uploading, a.k.a. downloading your mind into a computer and removing the need for a brain at all, is one possibility — but it's usually a one-way street. This is clearly not good if you want your characters to keep a physical body and interact later with other humans face-to-face. A Brain–Computer Interface is another option, but leaves the body even more vulnerable; it's unguarded, but still needed to keep the person alive, requires physical maintenance, and has Poop Socking concerns.

So instead, you use this trope. Somehow, you turn a character's whole body into data and put them into a computer (or Cyberspace or whatever). This leaves fewer issues to be concerned with, assuming you can get the person back out again — and if you can't, that presents a whole new plot possibility.

Downplayed if things are in a storage medium of some kind as part of a teleportation system instead of immediately going from one place to another.

The related trope Telephone Teleport involves moving a physical object through a system for moving data. When people are physically transported into television shows and other media, that's Trapped in TV Land. Use Portal Picture, Portal Book, and Magic Mirror for the actual objects that may be used to suck people in.

Digitized Hacker is not a Sub-Trope (in that the hacker may use Brain Uploading instead), even if some examples of this are called "digitization".