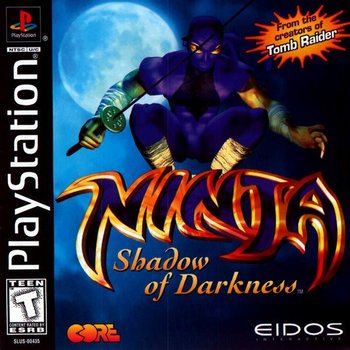 Ninja: Shadow of Darkness is a 1998 action video game for the PlayStation, developed by Core Design and published by Eidos Interactive.

In the Sengoku era of feudal Japan, a power-hungry warlord, disagreeing to a peace treaty, has awakened the great Shadow Demon in an attempt to take over the land and rule the world. Chaos consumes the land, as the warlord, now in control of demonic forces, ravaged through entire villages and cities, and all hope lies in Kurosawa, the young but skilled ninja-in-training, which you will take control of in a 3-D Beat 'em Up video game spanning one action-packed level after another.

The game is known for being notoriously difficult due to numerous platformer elements and instant death traps.