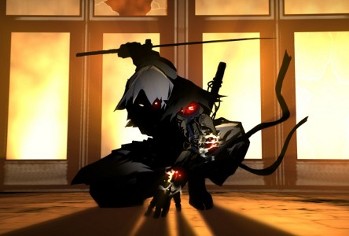 "All the great warriors of my culture celebrate death. They welcome it. Dying in battle is considered a great honor… What a load of shit."
—Yaiba, the protagonist
Advertisement:

Yaiba is a Beat' em All Action Game that came out in early 2014, result of a collaboration between Team Ninja and Sparks Unlimited, and directed by Keiji Inafune. The protagonist is Yaiba, a revived cybernetic ninja who was killed by the legendary Dragon Ninja Ryu Hayabusa and came back to life angry. Very. In his search for his arch-enemy, he will slay his way through hundreds of not particularly bright zombies.

The game features a very fast and offensive gameplay veering on the Mass Beat 'em All type, a liberal use of Action Commands, a visual aspects heavily inspired from Comic Books, and some light Black Humor, using an abundance of crudeness and profanity.

Oh, and there is Ninja Gaiden in the title, making it a Spin-Off to the series. The game was released in March 2014 for PS3, 360, and PC. The latter which is a first time for Team Ninja to release a game for that system.