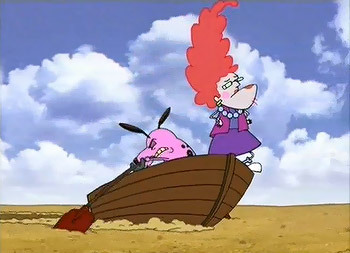 I don't give reasons. I give orders!
"Though the cross-section of a rippled sand surface often assumes an outline which closely resembles both the actual cross-section of a disturbed water-air surface and also the graph on a time basis of any simple vibration, the resemblance is in appearance only."
— Ralph Bagnold, The Physics of Blown Sand and Desert Dunes
Advertisement:

Water is cool, but how much cooler would it be if we replaced it with sand? Rivers, lakes, whirlpools, even whole oceans of sand that behave more or less exactly like a body of water are common in desert settings. Bonus points if ships sail said sandy seas (say that ten times really fast). You will even often find native life swimming in (or above) these seas, with everything from Sand Guppies to threatening Sand Sharks to full-blown Sand Worms.

A commonly found type is the sand whirlpool, which works in a similar manner to quicksand in that anyone who steps into one will be quickly pulled down and suffocate.

In a broader sense, this can also apply to when anything solid or semi-solid is treated like water. For instance, while swimming in a pool of coins.

While sand can act like a fluid, it is a non-Newtonian fluid which means it won't act like water. You can stand on it when it is stationary, for example, but not when it is fluidized. Just about everyone must have seen the experiment where you blow air through sand, giving a fluidized bed that behaves like water. It's also extremely abrasive: anything with sand running over it or through it is likely to be scoured down to nothing fairly quickly unless it's harder than quartz, especially if it has mechanical parts. It's also a tad difficult to breathe sand, whether you attempt it with gills or lungs. But, hey, it's cool enough so we can forgive it.

This is often a feature of the Shifting Sand Land, the Sea of Sand and the Thirsty Desert. For another substance that is often treated like funny-looking water, see Lava Is Boiling Kool-Aid.

Compare Space Is an Ocean, The Sky Is an Ocean. Contrast Water Is Air.