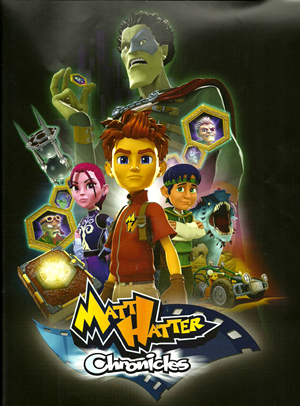 Matt Hatter Chronicles is a British-Canadian-Indian animated series produced by UK's Platinum Films that began airing on Teletoon on September 8, 2012. The show also aired on Cartoon Network in India and CITV in Britain.

For generations, the Hatter family screened movies, not realising that the book known as the Chronicles was releasing villains into another dimension known as the Multiverse. Defeating those villains became the duty of the Hatter family, but after Alfred Hatter got imprisoned by Lord Tenoroc (Kevin Eldon), it is up to his grandson, Matt Hatter (Tommy Campbell), to take up this duty. To help him, he is joined by Roxie (Larissa Murray), a Tracker and Gomez (Marcel McCalla), a Keeper.

The series ran for 52 episodes over 4 seasons.