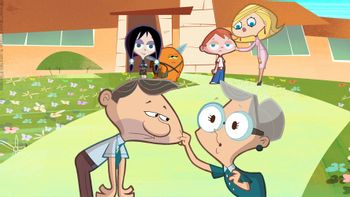 Matt's Monsters is an animated series produced in 2009 and broadcast by Disney Channel.
Advertisement:

In a World… where monsters live freely among the humans and cause trouble, a boy called Matt Average runs a monster hunting company to help the people from the tranquil city of Joliville. He will tag along Bruce, his over-enthusiast father; Dink, his friendly monster pet; and Manson, the laid-back Gothic Girl Next Door. Together, they form the Average company, which will give the dangerous monsters a run for their money.