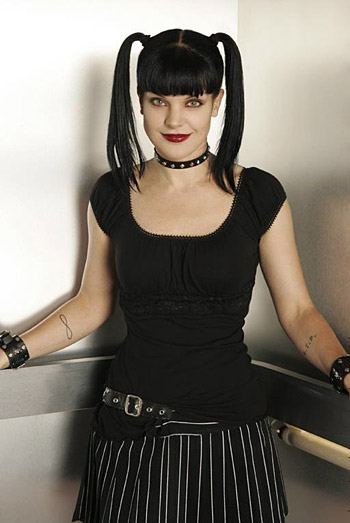 Relax, I don't bite. (Unless you ask nicely.)
"Well her clothes are blacker than the blackest cloth
And her face is whiter than the snows of Hoth
She wears Doctor Martens and a heavy cross
But on the inside, she's a happy goth."
— The Divine Comedy, "The Happy Goth"
Advertisement:

The stereotypical Goth character, especially in teen television shows, is frequently a Snark Knight or a Deadpan Snarker, someone whose dark clothes and grooming reflect a pessimistic mentality. Contrariwise, the Perky Goth, who is almost always female, operates on the principle that dark does not always mean depressing. Sometimes, a singular Goth takes on both personalities.

She wears the clothes, but her personality is always cheerful and amiable (occasionally approaching Genki Girl territory). Appropriately, this is a Sister Trope to Elegant Gothic Lolita (referring to an actual subculture mainly popular in Japan). If she's supposed to be attractive, she has a strong chance of being Raven Hair, Ivory Skin.

While the trope is sufficient to cover both, a character who is to Emo as this trope is to Goth would essentially be a "scene or cupcake emo", which are notable for their pink/black stripes. This is technically a different subculture than emo, but they're closely related and scene can be summarized as "Perky Emo with a little bit of rave culture".

And to emphasize: perky goth is an acknowledged part of the goth subculture, not just something made up by media.